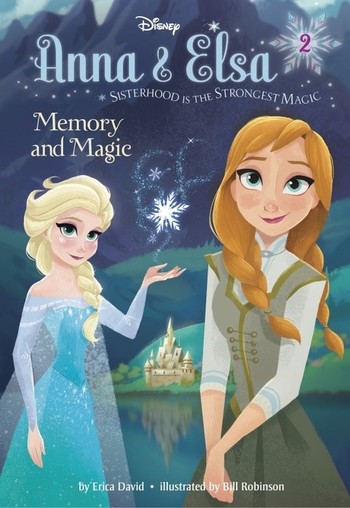 Cover of the second installment, Memory and Magic
Anna & Elsa: Sisterhood is the Strongest Magic is a series of children's chapter books based on Disney's Frozen franchise. While dubiously canon (like all Disney extended media), they give at minimum semi-canon events after the film. They also delve into the characters more.
Advertisement:

The books released thus far are: All Hail the Queen, Memory and Magic, A Warm Welcome, The Great Ice Engine, The Polar Bear Piper, Anna Takes Charge, The Arendelle Cup, The Secret Admirer and Return to the Ice Palace.

Compare to A Frozen Heart, a book adaptation of the film aimed at older fans that also delves into Prince Hans's backstory, and A Sister More Like Me, a picture book based on the film.