Literature / Anna and the French Kiss 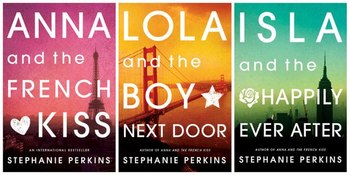 Anna and the French Kiss is a series of three young adult romance novels by Stephanie Perkins. Each novel follows a different girl from a group of friends with a dramatic love life.

The novels have a reputation for being sickly sweet 'guilty pleasure' fiction on book-a-holic websites and blogs.