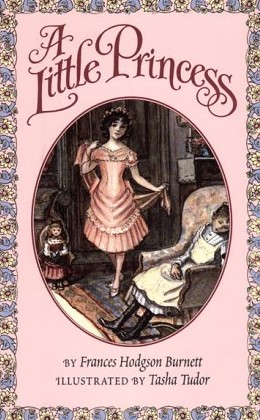 A 1905 novel by Frances Hodgson Burnett, author of Little Lord Fauntleroy and The Secret Garden. Also known as Sara Crewe and The Little Princess.

Sara Crewe, the daughter of a British Army officer, is refreshingly kind, generous and clever, despite her father's wealth buying her every luxury she could desire. She retains this attitude even when she is packed off to a boarding school for formal education. However, a couple of years later, word comes that a bad investment has bankrupted her father, who subsequently died of Brain Fever brought on by the shock.

Unable to pay for her education and having no known relatives, Sara has no choice but to accept a position as a servant at the boarding school. Despite these hardships, she continues to be kind and gracious, keeping her spirits up by believing that there is still magic in the world and things will get better.

It becomes more and more difficult for her to keep that attitude glued on as time passes, especially when she is denied food as a punishment. Sara is about to give into despair when warm clothes, bedding and food begin to appear out of nowhere in her attic room. Her father's associate, Mr. Thomas Carrisford, has been searching for her since Crewe's death. He'd sent the gifts not knowing Sara was "his" girl, just wanting to help someone in need. He gives her back her half of the "bad investment," which in the end turned out to be worth many times more than he and her father had anticipated, and takes her as his ward. Her fortune restored, Sara returns to her former social station, but she does not forget those who were kind to her when she was in need.

Inspired a few movie adaptations, most notably one starring Shirley Temple in 1939 (titled The Little Princess) and one directed by Alfonso Cuarón in 1995. The latter cast Liesel Matthews in the role. It has also had many stage adaptations as well as various television shows, including a critically acclaimed World Masterpiece Theater Princess Sarah anime series in The '80s and the more recent (and far more loosely-based) anime Str.A.In.: Strategic Armored Infantry, which adds fanservice and mecha along with giving the heroine an alternative reaction to trauma. In SPACE. See also the 2009 Japanese live-action drama Shōkōjo Seira, which move the action to Japan and age-up the characters. There's even a 2011 musical adaptation (starring Sierra Boggess), a VeggieTales adaptation (2012's The Penniless Princess), and indie developer Hanako Games had released A Little Lily Princess, a Visual Novel adaptation in May 2016.

Not in any way a Distaff Counterpart to The Little Prince, though there's a paper to be written on that topic. Please do not confuse with Alice Soft's Little Princess, or Tony Ross' Little Princess children books.

Compare the 1858 French novel Malheurs de Sophie with a similar Riches to Rags and Rags to Riches premise affecting a little girl from the aristocracy.

The original novel contains examples of the following tropes:

The 1939 film provides examples of:

The 1986 WonderWorks mini-series provides examples of:

The 1996 animated film contains examples of: