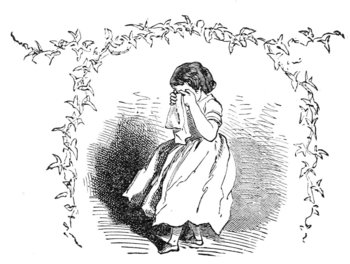 Young Sophie has a lot to learn...
Malheurs de Sophie (Sophie's Misfortunes) is the first of a trilogy of French children's novels by the Russian-born Comtesse de Ségur (born Sophia Rostopchina), followed by sequels Les Petites filles modèles (The Good Little Girls) and Les vacances (The Holidays). The books were published in 1858-59 and together constitute a Bildungsroman. Sophie de Réan is a little girl growing up on an aristocratic estate, brought up by her devoted but firm and morally upright mother. The stories follow Sophie through a series of misadventures, caused at first by her own headstrong and unruly behavior, and later by a terrible tragedy in her family that will result in dramatic turns of events that work out badly for Sophie and encourage her vices, until a family friend, the widowed Mme de Fleurville, shows interest in helping her. The three novels can be summarized as follows:
Advertisement:

Although the novels are meant to be didactic, they are not without comic relief and besides the moralistic messages that they contain for children, also have a strong message about how parents should be kind toward their offspring and reasonable when disciplining them.