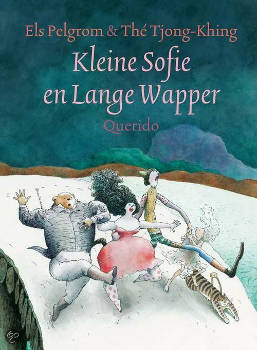 Little Sophie and Lanky Flop (Kleine Sofie en Lange Wapper) is a Dutch children's book, written in 1984 by Els Pelgrom and illustrated by Thé Tjong-Khing. The book has won a lot of awards, and has been published in about a dozen languages, including English.

Sophie is a curious young girl. She's heavily implied to be dying of cancer, and spends her days in bed, bored out of her mind. One night, her cat Terror and her dolls (Lanky Flop, Mr. Bear, and Arabella, among others) come alive in front of her eyes to stage a theatre play. Sophie is excited at the idea, and begs for a chance to join in. The cat and the dolls are reluctant — but they decide to let her be part of the play, if she's so keen on finding out what's "for sale in life". Before she knows it, Sophie is drawn into the world of Terror's story, which suddenly seems frighteningly real. Being a Dutch author, Pelgrom pulls absolutely no punches. Sophie is quickly shown extreme poverty, death, sex, betrayal and decadence — everything life is all about.