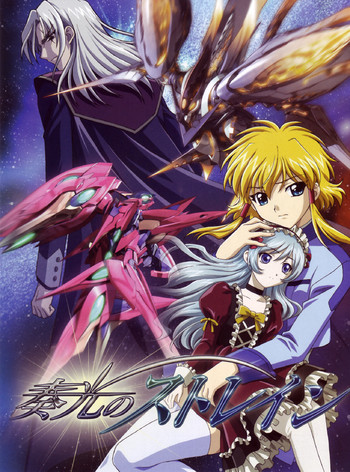 "Only you can do what you've decided to do. If you keep that in mind, nothing is impossible."
Advertisement:

Sara Werec (a jumbled "Sara Crewe") has been groomed from birth as an elite Reasoner, pilot of a mecha called a Strain. Only those who were chosen before they were born can pilot one (the thing relies on a psychic connection with a power core that includes the user's own brain cells), generally meaning the upper-crust military families. Her main reason for joining the army is to find her beloved brother, over whom the staff at Grabera Academy gushes. She's just about to graduate and take the side of the galactic Union in an ancient war against The Empire of Deague.

Then in come Deague forces, led by a stolen, modified Strain piloted by Sara's dear brother. The entire school is destroyed. No one except Sara is left alive.

Several months later, she takes another identity, goes to another school and starts training as a grunt pilot, having lost said brain cell core in the attack. But a mysterious doll with a psychic aura (called Emily) changes everything again, and soon Sara's back in the fray, although nothing will let her go that easily. Her goal: to find her brother (who now works for Deague Captain Vivian Medlock) and figure out just why he would do something so horrible. And when she does, can she face him?

Aside from its rather shocking beginning, the series has become notable for being chosen as one of the series to headline the launch of Funimation's own Internet video-on-demand service, allowing the entire series to be legally viewable online in fairly high-quality standard-definition for free, with higher-quality single-episode purchases and DVD purchases available. This later became industry standard for almost any licensed anime. Anyone interested (and living in America) can see the series here