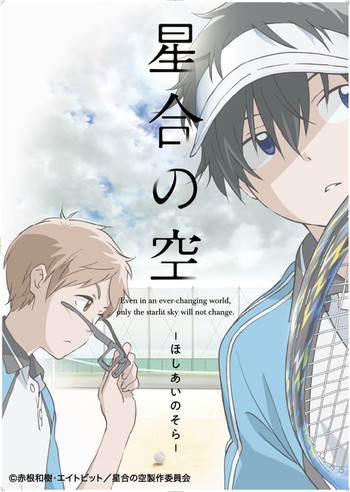 One of the promotional posters for the anime. Featuring Touma (left) and Maki (right).

Maki Katsuragi has just transferred into a new school, Shijou Minami. By sheer happenstance, he reunites with someone from his childhood called Touma Shinjou, who witnesses Maki's agility and asks him to join the school's soft tennis club, which is on the verge of shutting down. Maki initially refuses to join, but Touma insists and Maki agrees to join under the condition that he gets paid for his efforts.

Stars Align is an anime series produced by Studio 8-bit and directed by Kazuki Akane. It premiered on October 11, 2019, running for 12 episodes, although the creator would like to make a sequel possible since it was originally planned for 24 episodes.