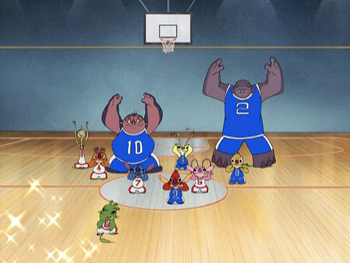 Wave your hands up in the air
That's the way we do it
Let's get to it
Come on, everyone!
From left-to-right...  Back row: Pleakley, Jumba, Sparky, and Gantu. In V formation: Sample, Stitch, 627, Angel, and Reuben. Cleaning in front of everyone else: Felix.
"Stitch Meets High School Musical" is an anime short that was first broadcast on Disney Channel Japan in June 2007,note This Yahoo! Japan post

about the short, dated June 18, 2007, states (as web translated) that it came on about a week from then. with an international release the following year.
Advertisement:

As implied by the title, it features Disney's lovable blue alien Stitch (and several other alien characters from Lilo & Stitch) in an Affectionate Parody of the hit Disney Channel Original Movie High School Musical. It's also the first animated work in the Lilo & Stitch franchise made after the 2006 end of the original Lilo continuity, predating the Stitch! anime by over a year.

Stitch, Gantu, Sparky, Sample, Felix, Reuben, 627, and Angel play a friendly game of basketball in a random high school gym while Jumba and Pleakley watch. First, we see Stitch close to scoring a basket until Sparky shocks him to steal and score for his team. Then, after Stitch scores a basket with the ball in his mouth, he couldn't get it out, so Sample and Felix jump on him so he could spit it out. (It Makes Sense in Context.) However, he spits it out so hard that the ball flies out, bounces onto the overhead scoreboard, and gets stuck. So, Stitch gets an idea to have everyone jump in time to shake the gym in hopes of bringing the ball down, and it quickly turns into a choreographed dance set to the tune of "We're All in This Together".

There are two versions of this under three-minute short; the full version

that was originally broadcast in Japan lasts for 2:50, while a shortened version

pares down and speeds up the first part (while also adding "Get'cha Head in the Game") to cut the whole thing down to about 2:15. The High School Musical 2: Deluxe Dance Edition 2-disc DVD, released on September 23, 2008, features a slightly different edit of the shortened version on the second disc as part of the High School Musical Around the World series of music videos.

This anime short provides examples of the following: