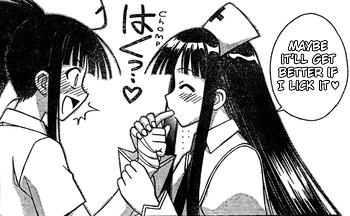 One of the characters may get their finger hurt (most likely when preparing food). Another character will then come in and suck on the wound in order for the finger to heal better. Expect the person having their finger sucked to blush and act embarassed by this physical intimacy.