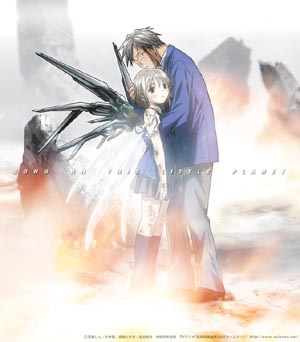 The tentative budding relationship between petite Chise and bitter, emotionally distant Shuuji becomes a little more complicated when Shuuji discovers that Chise has been converted into a living weapon of mass destruction by the JSDF.

Originally a seinen manga series by Shin Takahashi that ran in Big Comic Spirits from 1999 to 2001, it was adapted into a 13-episode anime in 2002. An OVA side-story was released in 2005, Saikano: Another Love Song, as well as a live-action movie in 2006. The manga is licensed Viz Media, they had the anime too, but they lost the license as evidenced by the recent announcement of the anime being rescue licensed by Sentai Filmworks.

Alternative Title(s): She The Ultimate Weapon