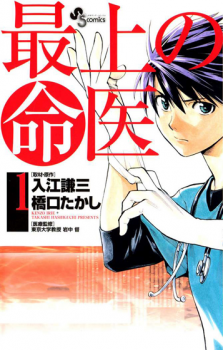 Mikoto Saijou was born with a heart defect. However, due to being operated on by skilled pediatric surgeon, Mamoru Shindou, he made it out alive. In gratitude, Mikoto wants to become a surgeon and someday be the greatest pediatric surgeon in the world. In his quest to change the Japanese medical system, he encounters new allies, who joined his side after they were inspired by his passion to help children and prodigious skill in medicine.

Saijou no Meii (also known as The Best Skilled Surgeon) is a shonen manga created by Takashi Hashiguchi with assistance from Kenzou Irie, who helped with most of the medical information. The former is known for creating a prior manga series, Yakitate!! Japan. Saijou no Meii is serialised by Shonen Sunday. The manga ran from 2008 to 2010 and ended with 11 volumes. The series has a live action adaptation and a ongoing sequel named Saijou no Meii - The King of Neet that stars a new protagonist.