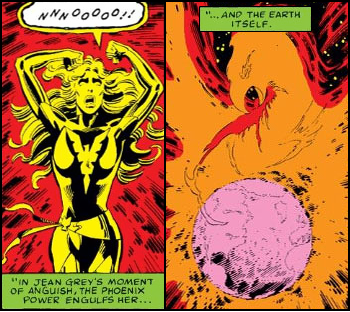 Most players agree that they went too far buffing Phoenix in Marvel vs. Capcom.
"Did you know there's an entire chapter devoted to you in the Darkhold? That's the book of the damned. 'The Scarlet Witch is not born, she is forged.' [...] It's your destiny to destroy the world."
— Agatha Harkness, WandaVision
Advertisement:

When The Hero is in charge of preventing The End of the World as We Know It, imagine their surprise when they find out the threat comes not from some Evil Overlord, but from one of their friends or family destined to bring about the end of the world. The reasons for this can vary.

Maybe they have inherited a form of Enemy Within or Superpowered Evil Side capable of destroying worlds, or have been possessed by an Eldritch Abomination. Most heart wrenchingly, they are completely innocent yet their mere existence acts as a Butterfly of Doom that can destroy the Cosmic Keystone. Either way, they're going to somehow bring about the apocalypse in some form Because Destiny Says So.

Needless to say, the villains (and certain heroes) who realize this want to nip this in the bud by killing them. Of course, seeing as that person is one of their True Companions (usually a Love Interest), the heroes say Screw Destiny and try to protect the chosen one from others and potentially, even themselves. Then again, some villains (and certain heroes) may well want them to destroy the world, and kidnap them in order to brainwash or sacrifice them in a manner that kick starts the apocalypse. In which case the heroes have to find a way to stop the world ending and save their friend... and both may be mutually exclusive.

Sadly, because You Can't Fight Fate these attempts to prevent the cataclysm may become self-fulfilling because Prophecies Are Always Right (in such a case, it's a Downer Ending). Optimistically, their friend's efforts and the Power of Trust may embolden them to become an Anti-Anti-Christ and successfully rebel against their destiny...even if it requires the ultimate sacrifice.

Prophetic Fallacy may also be a cause for the villain's alarm, or maybe the Powers That Be were merciful.

This is more of a plot than a character (it could be either). Much like Barrier Maiden, this trope is open to all genders. See also/contrast Sealed Inside a Person-Shaped Can, Big Bad Friend, Save This Person, Save the World, Unstable Powered Woman, and Barrier Maiden.note That trope is basically the inversion of this one. The Barrier Maiden's purpose is to sustain the world while the Apocalypse Maiden's purpose is to destroy it. May well become an Anti-Anti-Christ.

All spoilers will be unmarked.

"The Earth is MINE!"

In spite of the other Titans attempts to stop it, Raven fulfills the prophecy that she would be the portal that would bring Trigon to Earth. As the demonic being crosses over, he makes a terrifying declaration of victory.

Example of:
The End of the World as We Know It

"The Earth is MINE!"

In spite of the other Titans attempts to stop it, Raven fulfills the prophecy that she would be the portal that would bring Trigon to Earth. As the demonic being crosses over, he makes a terrifying declaration of victory.