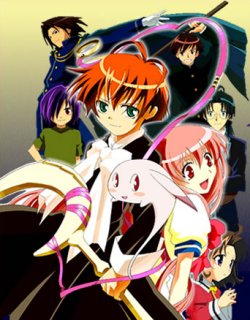 As punishment for something really extreme, Norse god of mischief Loki is bound into the form of a human boy and is collecting the evil in men's hearts to restore his status. To accomplish this goal, he opens a detective agency. But Odin, Lord of the Gods, hates him, and is constantly sending the other gods from Asgard the World Of The Gods as assassins. After all, he's destined to bring about The End of the World as We Know It, even though he has no interest in doing so.

Meet Mayura, a paranormal obsessed Miko who bulls her way into Loki's life as his "detective assistant"... and has absolutely no idea whatsoever about the nature of his reality throughout the entire series. Along with her and an interesting group of friends and enemies (mortal and ethereal alike), Loki attempts to figure out the true nature of the situation he has found himself in... and the impact it shall have.