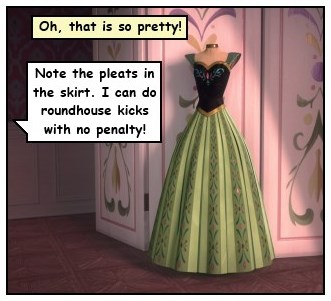 A perfect outfit for playing a Pretty Princess Powerhouse.
Adriana: "It looks like Arendelle has a new queen."
Mary: "Dibs on playing her spunky, plucky sister!"
Advertisement:

Knights of Buena Vista was a Campaign Comic covering mainly the Disney Animated Canon and a few other Disney works and Pixar films.

Frozen (2013) was the first work to be covered, beginning with all the player characters dying in battle, including the king and queen of Arendelle (a kingdom they founded). Fortunately those characters had daughters, and we follow the subsequent adventures as Elsa is crowned queen.

Next comes Wreck-It Ralph, where Roy takes over, and they play a Cyberpunk spinoff of their roleplaying game, just as game characters instead of hackers.

The comic has since been taken down from its Tumblr website, making it much more difficult to track down.

Can still be found on various web archives, however. For example:

Tropes in the comic and author's notes: