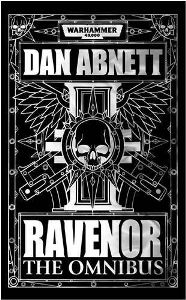 A mind without purpose will wander in dark places...
Advertisement:

A trilogy of novels set in the Warhammer 40,000 universe featuring the heavily disabled psyker Inquisitor Gideon Ravenor and his retinue, written by Dan Abnett.

The first of the novels, Ravenor, features the team's investigation into a suspicious drug known as Flects on Eustis Majoris. Ravenor Returned leads the heroes deeper into a conspiracy encompassing the whole world, and begins Carl Thonius's fall into Chaos. The third novel, Ravenor Rogue ties the threads together and finishes this particular arc. There are also two short stories, collected along with the three novels in an omnibus edition. The first, Playing Patience, is set between the Eisenhorn trilogy and this one, and the second, Thorn Wishes Talon, is set between Ravenor and Ravenor Returns and fills in some extra backstory. The series is followed by the Bequin trilogy.

Ravenor was first mentioned as an aside in an early Gaunt's Ghosts novel. He was developed as a secondary character in the Eisenhorn books, during which he suffered the horrendous injuries which led to him being confined to his life support chair.

These books feature examples of the following tropes: