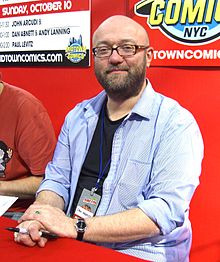 "I was in the third year of an English degree at Oxford, and I wasn’t sure what I was going to do with it. A friend knew I loved comics, and suggested I approach Marvel. Next thing I knew I was on the editorial staff in London, and I started writing freelance."
(On being asked how he got started in the industry)
Advertisement:

Dan Abnett (born 12 October 1965) is a British writer. He is the author of many acclaimed Warhammer 40,000 tie-in novels, including such series as Gaunt's Ghosts and its spinoff Double Eagle, Eisenhorn, and Ravenor, as well as Horus Rising, Legion and Prospero Burns in the Horus Heresy series and the standalone Brothers of the Snake. He's widely considered the best author of the franchise, having been appointed to write the first and last Horus Heresy books.

Abnett and his writing partner, Andy Lanning (Fan Nickname: D'n'A), have also written many comics together, including a well-regarded run on an incarnation of the Legion of Super-Heroes. They wrote the fourth Nova and the second Guardians Of The Galaxy series and several Space Crossovers for Marvel Comics, including Annihilation: Conquest, War of Kings and The Thanos Imperative, as well as The Authority for WildStorm. In Britain, he has contributed extensively to 2000 AD, including a large number of Judge Dredd stories, and is the creator and primary writer of Sinister Dexter and Kingdom. He's also written alone for X-Men, and published a number of unrelated novels, including the recent steampunk/modern fantasy novel Triumff - Her Majesty's Hero and the military sci-fi novel Embedded.

Abnett has also written several comics, books, and audio plays in the Doctor Who Expanded Universe (both Doctor Who and Torchwood), including the bridging part of the multi-author book The Story of Martha (set during "the year that never was" between "The Sound of Drums" and "Last of the Time Lords"), as well as a Primeval tie-in novel.

He also was one of the writers for Sega and Creative Assembly's Alien: Isolation, wrote dialogue for the Orcs generated by the Nemesis system in Middle-earth: Shadow of Mordor, and was writer for Warhammer 40000 Darktide.

Additional works where Dan Abnett assisted in their creation: