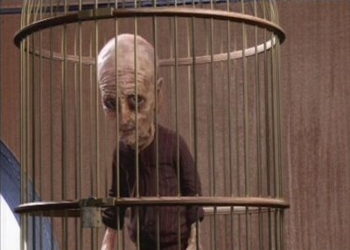 Pictured: The Doctor.
(Yes, really.)
♫ I can't decide whether you should live or die ♫
— The Master (showing his love for the Scissor Sisters)
Advertisement:

The one where the Doctor laughs menacingly... again!

It's one year later.

The Master is the supreme ruler of the planet. Most people have spent this year in slavery (or dead) while the Master forces them to build a space fleet of makeshift (yet deadly) rockets to start a new age of space conquest and terror. Meanwhile, Martha Jones has been Walking the Earth, picking her way amongst the ruins, and following the Doctor's last instructions, looking for the four segments of a weapon that can allegedly kill the Master permanently. She also discovers that the Toclafane are mutated remnants of the humans from the end of time.

Meanwhile, the Master has made Martha's family into his personal slaves. He's also got Jack chained up as a toy to kill over and over. He plays with the Doctor for a bit while singing along to the Scissor Sisters, then uses his laser screwdriver to make him age extra centuries, turning him into a shrivelled homunculus.

Martha's returned to Britain, where she tells her story one last time and then is captured by the Master's Mooks. Up aboard the Valiant, the Master makes her Kneel Before Zod and prepares to kill her while a clock starts the final countdown to launch his war fleet across the universe.

Then Martha laughs at him. Come on, she says, Plot Coupons? Seriously? And the Doctor asking someone to kill? No, what she was really doing was telling everyone about the Doctor. Thanks to Martha's stories, and using the Master's global countdown as a timing guide, the whole Earth manages to think the Doctor back to health and youth with a feedback effect through the Master's own mind-controlling cellphone satellite network, keeping people under his influence. Briefly given full-on psychic powers by the event, the Doctor disarms the Master, corners him and utters the words he's been waiting all year to say... "I forgive you."

The Master absolutely freaks out at this brutal turn of events, and after ordering the Toclafane to kill everyone on board, he teleports down to the surface, followed by the Doctor. As graceful in defeat as ever, he threatens to simply detonate his entire planet-wide arsenal. Earth will burn like Gallifrey, only this time he and the Doctor will witness it together.

...Only the Doctor doesn't budge. After all the centuries the Master's clung to life, everything he's done to himself and others to cheat death (from being a rage-fuel walking corpse, to stealing a Trakenite's body, to becoming a Deathworm Morphant), is he really going to kill himself for good now? His bluff called, the Master hands over the detonator and — after a brief struggle — is teleported back to the Valiant.

Jack manages to sneak by the Toclafane and destroy the Master's paradox machine, which reverses time to exactly one year ago, with everyone's memories neatly wiped and all the mutated humans having disappeared from the present day. But everyone in the "eye of the storm" — including Martha's family — keeps the memories of everything they've seen.

Unsurprisingly, Francine's first instinct is to point a gun straight at the Master. The Doctor manages to talk everyone down — as the only other Time Lord left in existence, his old friend is his responsibility. Jack retorts that they can't possibly trust him, and the Doctor agrees. The only place the Master can be held, and maybe rehabilitated one day, is the TARDIS. The Master finds the idea amusing... until he realizes the Doctor means it. Even after everything the Master's done, the Doctor's fully prepared to give up wandering the universe alone in order to care for him...

However, Lucy isn't quite so forgiving, and puts one right in the Master's left heart. Since one in both hearts would be permanent death, the Doctor urges the Master to regenerate, but it's here where we find out regeneration is optional, and as a final up yours, he dies in the arms of a wildly sobbing Doctor, leaving him once again all alone in the universe.

The Master's corpse gets a Viking Funeral while Martha's family remains deeply traumatised. The Doctor puts a stop to Jack's Vortex manipulator; "I can't have you walking around with a time travelling teleport. You could go anywhere. Twice. The second time to apologise." Jack leaves because he misses Torchwood Three, but not before telling the Doctor and Martha that he's very slowly aging into something unknown and that his nickname was once "The Face of Boe", to their disbelief. He dashes off to go rejoin Torchwood. Also, Martha finally understands that the Doctor will never return her affections. She gives a thinly veiled confession and leaves, because she doesn't want to waste her life pining for the Doctor. Before she goes she hands him her phone, as she realises that she may need his help again some day.

Meanwhile, at the Master's funeral pyre, a mysterious woman reaches into the Master's ashes and holds up his ring — a ring, we now clearly see, with Gallifreyan writing all over it. An evil laugh echoes into the distance, leading everyone not to wonder if, but when...

As the Doctor sets off for his next adventure, henote first experiences a brief complication with his fifth self, and then gets a rather rude surprise. A ship. Crashing straight through the side of the TARDIS. The name on the ship's life preserver? Titanic...