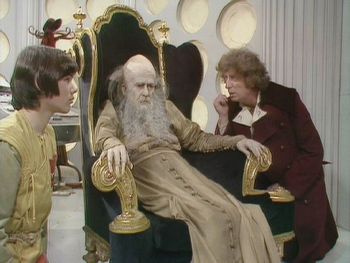 The Keeper, sitting on his magical moving chair.
"They say the atmosphere there was so full of goodness that evil just shriveled up and died. Maybe that's why I never went there."
— The Doctor
Advertisement:

The one with Skeletor. Who then becomes Captain Camp.

Welcome to Traken, a world so perfect that evil can't survive! Seriously: any evil that tries to enter the atmosphere will literally crystalise out of the Trakenite air, ending up as a nugget of evil enclosed in a creepy humanoid statue with glowing red eyes.

And yet the Trakenites are good to the evil statues. They are so good that they assign people to look after the statues: bring them little bouquets of flowers, inquire after their families, persuade them to forsake wickedness, wipe off the bird poo, etc., until such time as the statue's residual sentience fades away, probably from sheer irritation. Then the stone crumbles into harmless dust and enriches the Trakenite soil.

But one statue was different. One statue contained an especially intractable malevolence, dubbed "Melkur", and its assigned guardian was a high-ranking Trakenite: Consul Kassia. Kassia's husband, Consul Tremas, was also a Traken elite, not to mention next in line for the Keepership; his daughter Nyssa was poised to carry on her family's august traditions. So, when Kassia was eventually corrupted by Melkur's malign influence, she was extremely well placed to wreak some serious damage to the Trakenite status quo.

Not that the planet's ruler, the kindly old Keeper of Traken, suspects The Mole in their midst. All he knows is that something is going pear-shaped, and he'd very much like the Doctor to drop by and help fix it. The Doctor is obliging, and soon he and Adric have made landfall—conveniently enough—right in front of Melkur!

They get hauled up in front of the Trakenite version of the Omniscient Council of Vagueness, where the Keeper is summoned again but only says "Evil! EEEEEEVIL!" Which, it must be admitted, does cast our heroes in a rather poor light. Thanks a lot, Keeper. Consul Tremas speaks up, protesting that the Doctor and Adric haven't been convicted of anything (yet, anyway); he gets rewarded by having them released into his custody and warned that his head is at stake if they misbehave.

Vicious group of people they got on this "perfect" world, isn't it?

Over in Tremas' quarters, we meet his daughter, Nyssa. She's been assigned to Melkur-visiting duty ever since her father and stepmother married, but she doesn't know that Kassia has been visiting it on the sly. Or that it's started talking to her, or given her a necklace that makes her evil.

Back in the Council Chambers, one of the interchangeable Consuls tries to commune with the Keeper to figure out what's going on, but the stress kills him.

Actually, Kassia kills him. Actually actually, the Melkur controlling her killed him, by shooting laser beams from her eyes.

Meanwhile, the Doctor, Tremas, Adric, and Nyssa run around trying to subvert the Melkur's evil plans, and the Doctor discovers that the being controlling the Melkur is actually his old enemy, the Master, still little more than a withered almost-corpse on the edge of death, seeking to use the powers of Traken to, well, not be a withered almost-corpse, understandably...and presumably get rid of the crusty black cloak while he's at it. Thing must smell awful by now, and we're not just talking about the Master's flesh. Dun-dun-dun.

The Master and the Doctor do their usual Foe Yay-laden dance of trying to beat each other, and while the Doctor does keep the Master from taking over the Source (some sort of Hive Mind for Trakenites), the Master has the last laugh. He hijacks Tremas's body, freeing himself from the Kentucky Fried Time Lord he has been for the past four seasons and exulting in "a new body, at last," which somehow de-ages and becomes a sharp-dressed, slick-haired man in a goatee. Just after the Master leaves in his disguised TARDIS, Nyssa enters, wondering where her father may be.