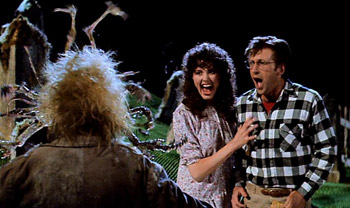 "Can I be scary? Well, whaddya think of this?"
[W]hen she turned, it was the burned face of Sandor Clegane looking down at her, his mouth twisted in a terrible mockery of a smile. "You are shaking, girl," he said, his voice rasping. "Do I frighten you so much?"
He did, and had since she had first laid eyes on the ruin that fire had made of his face...
— A Game of Thrones
Advertisement:

The human face is supremely important on a social and biological level. Most of our non-verbal communication comes from reading subtle facial movements, and its importance in our cognitive thinking is best shown in our tendency to see faces in inanimate objects (think of how many times you've looked at a rock face and thought you'd seen two eyes and a mouth). So there's something genuinely disturbing to most people about seeing a face visibly distorted, mutated, or rearranged ... so, naturally, this type of Body Horror is one of the most common Horror Tropes.

A Sister Trope and effective primary component of Nightmare Fuel.

It is in fact at least Older Than Feudalism — armies over the world have based their war masks around this trope, and in mythology and folklore, just about any self-respecting demon or supernatural evil will have one.

More recently, it has also become a staple of Surreal Horror.

This is a main symptom of Coming Back Wrong. Most humanoid examples of Our Monsters Are Weird will fit this trope.

This trope is commonly doubled with the Jump Scare in a Screamer Prank.

Interesting tidbit: this is one theory as to why some people are afraid of clowns. Exaggerated mouths, bulbous noses, and pin-prick eyes are downright terrifying to young children who haven't yet figured out that the person is just wearing make-up and not deformed.

Warning: Many of these examples contain image links. Read at your own risk if you are prone to losing sleep, especially if you're on a touch device where you may accidentally tap and therefore open links.