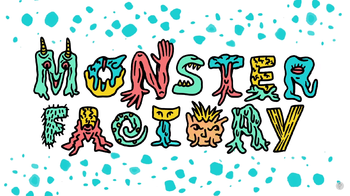 No middle sliders!
"This is not a mean-spirited show — it's about creating things that are initially horrifying and then finding the beauty within, as we can all do for ourselves and those around us — what is going on with the fucking eyes though, Todd!?"
— Justin, Fallout 4 — Episode 1

Monster Factory is a Web Video show on Polygon, from two-thirds of the team behind My Brother, My Brother and Me and The Adventure Zone.

Hosts Justin and Griffin McElroy pick a video game and abuse its character editor for fun and profit, typically going for the most outlandishly gonk avatar they can. They then take their monstrosity out for a spin, sometimes utilizing Classic Cheat Codes to add to the chaos (noclip, God Mode, Sequence Breaking, etc), especially if the character editor is too limited to really abuse. The third part of the show is corpsing. Justin and Griffin have no idea what they are going to see, and some of their creations have brought the show to a halt for as much as a minute while they pick themselves up from the floor.

In April 2018, the brothers announced

that they would be amicably leaving Polygon, but would continue to make Monster Factory videos for the website on a recurring basis. They made good on that promise in December 2018, returning with a Soulcalibur VI video on their own McElroy channel.

Advertisement:
Games and Monsters produced by the Factory

, as well as on The McElroy Family YouTube channel

. As of the Hungry-Faced Gil episodes, all Monster Factory episodes are only uploaded to The McElroy Family channel going forward. The series has been on hiatus since January 27th, 2021,note Justin stated on the podcast Gender Reveal that increasingly realistic video game graphics were making it harder to make monsters that didn't look like actual people with facial deformities although Justin and Griffin have not formally announced the end of the show. The boys returned from hiatus in March 2022 with an Elden Ring video and a promise for more.