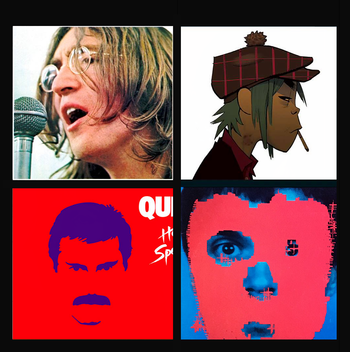 Clockwise from the top left: Let It Be by The Beatles, Demon Days by Gorillaz, Remain in Light by Talking Heads, and Hot Space by Queen.
Advertisement:

The cover of an album has various squares, each with a band members' face in them. Most commonly done with four squares, one in each corner, though variations with more or less are still fairly common. Similar shapes (rectangles, parallelograms, etc.) still count, and the squares may be slightly offset. Commonly used on singles, EPs, and Greatest Hits Albums.

The four-square variation is frequently a Stock Shout-Out to either The Beatles' album Let It Be or Andy Warhol's Shot Marilyns, five portraits of Marilyn Monroe painted in a riot of different colors, usually displayed in a grid of four.note The name comes from each canvas having been shot between the eyes by performance artist Dorothy Podber.

A Sub-Trope of Face on the Cover.

Examples with some other number of squares: