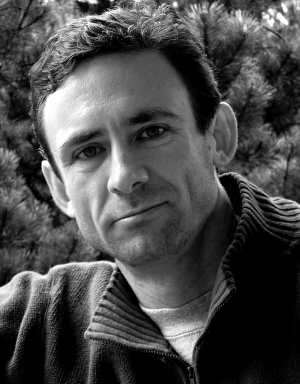 I am Jack's awkward smirk.
Advertisement:

Charles Michael "Chuck" Palahniuk (born February 21, 1962) is an American freelance journalist and novelist of French and Ukrainian descent. He is known most for writing the novel Fight Club, which the movie was based on, and has since then garnered a respectable following.

He has a minimalist writing style that utilizes a limited vocabulary, short sentences, and is meant to mimic the way an average person would talk when relaying a story to someone else. His stories typically start close to the end, with the protagonist recounting how he got there, the events of which might also be told out of chronological order as well.

His earlier works fall under the label of transgressive fiction

, while his later works contain more horror elements. Many people feel that his works are overly nihilistic and cynical, and have labeled him a shock writer. Palahniuk does not believe that his work is in any way cynical or nihilistic, and has gone on record referring to himself as a Romantic—presumably the old Chivalric Romance.

He is a distant nephew of actor Jack Palance (born Volodymyr Palahniuk).

His body of work includes:

Works by Chuck Palahuniuk with their own pages include:

Other works by Chuck Palahniuk contain examples of: