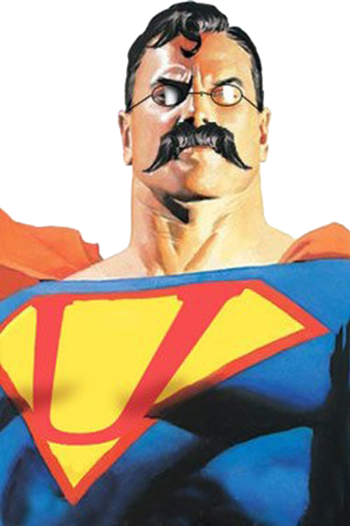 It's a bird! It's a plane! It's Übermensch!
Advertisement:

In 1883, Friedrich Nietzsche published a book called Also sprach Zarathustra, in which he elaborated his ethical ideal, the Übermensch. The name came from the concept about ordinary humanity believing there would be no morals or reasons to live if there was no Other to define morality and reason. Transcending this illusion makes one an "over-man".

This was a person, or for us, a character, who rejects the norms of society and lives by his own moral code.

Depending upon the character's role in the story and how cynical the story is, the Übermensch may be characterised as either The Fettered or The Unfettered.

Compare with Above Good and Evil, The Anti-Nihilist, Blue-and-Orange Morality, Byronic Hero, Moral Sociopathy, Pure Is Not Good and Well-Intentioned Extremist. Compare and contrast with Dark Messiah, The Social Darwinist, The Sociopath and What Is Evil?. Contrast with the Straw Nihilist, who believes themselves to be this trope. This trope zig-zags with Psychopathic Manchild, if the person is socially immature or compromised.

Alternative Title(s): The Ubermensch, Uebermensch, Lives By His Own Moral Code