Character subpage for the main protagonist of Code Geass, Lelouch, given his own page due to the sheer number of tropes. 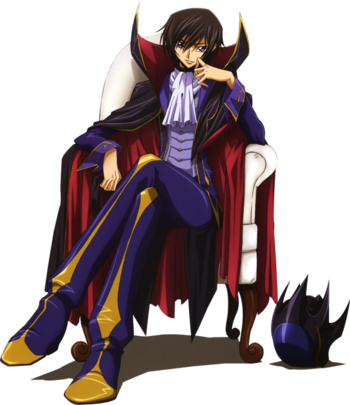 Advertisement:
Voiced by: Jun Fukuyama (Adult, Japanese dub) and Sayaka Ohara (Child, Japanese dub), Johnny Yong Bosch (Adult, English dub) and Michelle Ruff (Child, English dub)
"I am Zero! The man who destroys worlds — and the man who creates them!"
"[...] Then answer this! Are you just going to sit back and wait for someone else to defeat Britannia? Who?! You think if you wait long enough, some day the right chance will finally come? Don't be naive! If we don't stand up and do it ourselves, that some day will never come!"

The fallen prince of Britannia, exiled from the empire along with his blind and crippled little sister to Area 11, which is what Japan is referred to in this series. He despises Britannia and its survival of the strongest mentality, and seeks to tear it all down to make a gentler world for his sister. One fateful day, he gets the power to do exactly that, and crosses paths with the mysterious witch C.C. who grants him the power of Geass. Lelouch's Geass allows him to compel anyone to obey any of his commands, although It Only Works Once.

With this newfound power, he dons a cloak and a mask and assumes the identity of Zero, and works with the Japanese freedom fighters to form the Black Knights, to rebel against Britannia. This puts him at odds with his best friend Suzaku, an incredibly powerful soldier serving the very same empire that Lelouch seeks to destroy. From the mild mannered Lelouch Lamperouge, to the exiled prince Lelouch vi Britannia, to the cold, calculating, but very theatrical Zero, Lelouch dons many masks throughout the show and lives completely different lives. Above all, he has one goal: the destruction of Britannia, and he'll use whatever means necessary to achieve this goal.

Lelouch, under the guise of Zero, hijacks all broadcasts across Area 11 to announce the return of his rebellion against the Holy Britannian Empire, much to everyone's surprise.

Example of:
Do Not Adjust Your Set

Lelouch, under the guise of Zero, hijacks all broadcasts across Area 11 to announce the return of his rebellion against the Holy Britannian Empire, much to everyone's surprise.