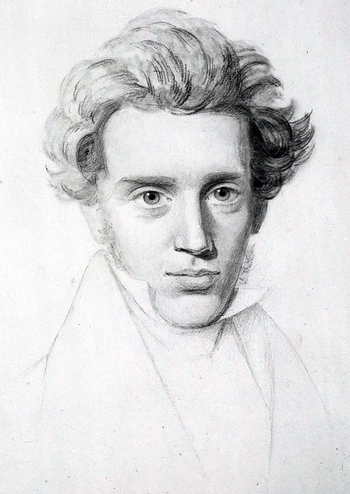 A sketch by his cousin, Niels Christian Kierkegaard
"Philosophy is perfectly right in saying that life must be understood backward. But then one forgets the other clause—that it must be lived forward. The more one thinks through this clause, the more one concludes that life in temporality never becomes properly understandable, simply because never at any time does one get perfect repose to take a stance—backward."
—Søren Kierkegaard, Journals
Advertisement:

Søren Aabye Kierkegaard (5 May 1813 – 11 November 1855) was a Danish writer, philosopher, Lutheran theologian, and social critic. He is largely considered to be the first existentialist, years before the likes of Friedrich Nietzsche and Jean-Paul Sartre, and has both religious and secular admirers. He wrote a multitude of works on the Christian religion, morality, psychology, and society using irony, metaphors, parables, and pseudonyms.

He was born in Copenhagen on 5 May 1813 to parents who were well into middle age; Michael Pedersen Kierkegaard was 57 and his mother, Ane Sørensdatter Lund Kierkegaard, 45. His family was plagued by instability, to the point of believing that his family is cursed. For example, only two of their seven children, Søren and his brother Peter, would live past age thirty-four. His father was very influential to him, and he inherited his Lutheran Pietism, his intellectual gifts, and even his melancholy. He then enrolled in the University of Copenhagen to study theology, philosophy, and literature.

In 1840, he was briefly engaged to Regine Olsen, a woman whom he was attracted to for a little over a year, but he broke off the engagement, partly because he thought being a husband would interfere with his vocation for being a writer and partly because he could not overcome his melancholy and felt unable to speak with Regine about its causes. He never fully recovered from this decision and remained smitten to her for the rest of his life.

Shortly after breaking off the engagement, he turned to writing, producing more than thirty works in twelve years. Kierkegaard's authorship came in two forms. In one form, he wrote using pseudonyms and indirect communication to explore viewpoints that are not his own, intending to help the reader see the false ultimates by which people live their lives. One of these pseudonymous works is Fear and Trembling, in which he, as Johannes de Silentio, comments on the story of Abraham and Isaac. His other form of authorship involves a series of discourses, in which he shows the reader what the Christian ideal really was. These works, Kierkegaard wrote under his own name.

His writing career took an unexpected twist when, in 1845, The Corsair, a satirical magazine, published a biting review of one of his works, Stages on Life's Way. The review turned Kierkegaard into a laughingstock, and he got into a nasty feud with the paper. At one point, he dared the paper to satirize him. The paper was more than happy to oblige.

His feud with The Corsair embittered Kierkegaard, but it affirmed his assertion that Christianity and "the crowd" are in conflict. This prompted him to write a series of polemics attacking "Christendom", his term for Christianity as a sociopolitical entity that made its adherents nominally Christian, but at the cost of knowing what it means to be a Christian; the Danish Church was his target.

His unrelenting assault on the Danish Church proved too taxing for his health and for his finances. He fainted in the streets of Copenhagen on 2 October 1855 and was subsequently hospitalized. He died on 11 November 1855.

Major Works:Kierkegaard was an incredibly prolific writer, writing a number of his works using pseudonyms.

Kierkegaard also wrote a series of Christian discourses in between his philosophical works, published under his own name. In these discourses, he shows the reader what it means to be a Christian and expounds on its ideals.