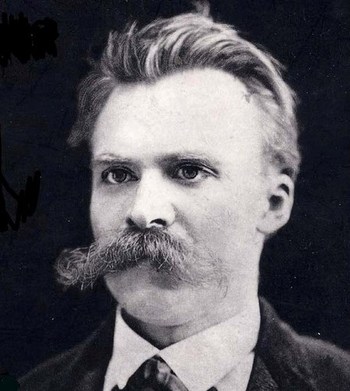 Der Überschnurrbartmensch. Translation: The mustache-man. Despite the resemblance, not Jamie Hyneman.
"Gods, too, decompose. God is dead. God remains dead. And we have killed him."
— Friedrich Nietzsche, The Gay Science, Aphorism 125 ("The Madman"), 1882 note  Fun fact: The quote "God is dead" already appears in a text of G.W.F. Hegel from 1802.
Advertisement:

Friedrich Wilhelm Nietzsche (15 October 1844 – 25 August 1900) was an eccentric German author who wrote lots of books laden with extremely provocative and controversial ideas for his time (some of which are still controversial to this day), and they made him famous. Nowadays, he is often placed among the most influential philosophers of all time. It didn't end well for him back in his day, though, as he went nuts and soon died in his fifties.

What made his books so popular? Good question. Probably, his writing style. In any event, his aphorisms can be quoted often; whatever one thinks of his ideas, he is one of the unquestionable masters of the German Language. Nietzsche is one of the few philosophical writers one might conceivably read simply for the joy of reading his prose. Of course, that could very well be part of his intellectual trap. One never knows with Nietzsche. See the Analysis tab for more.

Nietzsche's influence is hard to calculate, but is indisputably immense. He founded the modern philosophical position of Existentialism along with Søren Kierkegaard, laid the groundwork for the later philosophical position of phenomenology and genealogy and became a precursor for the philosophical position of Postmodernism. His criticism of Christianity had a profound influence on 20th-century theology, especially the work of Paul Tillich. He is also famous for predicting World War I (down to the decade, and while insane, no less), the destruction of the German Empire, and the role that antisemitism would have in its demise. After his death, his estate went to his sister, who later became a stout supporter of the National Socialists. The provocative tone and controversial subjects of his writing made it easy to subvert them for Nazi propaganda. Even today, many of his famous quotes lend themselves to be used for all kinds of extremist views and also their opposites.

He is also one of the mostly unsung heroes of psychology, along with the American William James. They contemporaneously (but separately) started treating the contents of the human mind with the nuance and seriousness we have come to expect, and in being the first to do so helped to make psychology a respectable and popular area of academic study that would later fully take off with Sigmund Freud, who particularly read Nietzsche as a student note although Freud denied this despite evidence on the contrary, and his contemporaries.

Fittingly for his view that "all is art", he also wrote a fair amount of decent Romantic classical music

Lastly, his name is spelled with one T, one Z, one S, one C, and one H. It's pronounced roughly as "Neats-shuh," though the French (who tend to be bigger than average fans) monosyllabically pronounce it "Neache." "Nee-chee" and "Nee-chuh" are generally also acceptable pronunciations, which are often used by English speakers. Just, whatever you do, do not try to pronounce the "Z" and you should be all right ("Z" sounds like "ts" in German).

Any discussion of Nietzsche's legacy tends to get really long (look no further than That Other Wiki's entries on it), as it wonderfully lends itself to wild theorizing and rabid interpretation, so please, please keep this list as brief as possible.

This section is still under construction. If you've read any of the missing books on the list, please help us by writing a short summary!

Nietzsche is a prolific Trope Namer:

References to Nietzsche in media

Nietzsche and his books are mostly used in media to convey metaphysical connotations where they could have easily been avoided, while most often butchering his actual philosophy.
open/close all folders
Anime and Manga
Comic Books
Film
Literature
Live Action TV
Music
Theatre
Video Games
Web Comics
Web Original
Western Animation