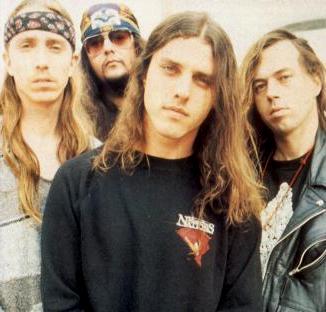 Chuck Schuldiner, Gene Hoglan, and a bunch of other guys.
Advertisement:

Initially, Chuck Schuldiner formed the band Mantas at the age of 16; after about a year, he dissolved the band and formed Death. After a lot of members were fired and hired by Schuldiner, the band's first album, Scream Bloody Gore (1987) was released. It is considered a landmark album of the genre, pretty much starting the trend for gory lyrics and brutality. Eventually, though, more "brutal" bands such as Deicide and Morbid Angel came along and out-brutalised Death. So, rather than up the heaviness, Schuldiner continued to grow musically, eventually heading in a more progressive direction starting with the album Human. Their transformation into a progressive/technical death metal band was one of the things that kickstarted that subgenre, along with the bands Atheist and Cynic.

The group, with its ever-changing lineup of members, disbanded in 2001 when Schuldiner died of complications from brain cancer at 34. The band remains one of the most influential death metal bands of all time, and Schuldiner is recognised as the "father of death metal", though he often downplayed the name "death metal" later in his career and regarded Death as a straightforward metal band towards the end of the band's lifetime.

Schuldiner was also one of two guitarists for Control Denied, a progressive metal band, which is considered the continuation of Death. In fact, many of the tracks on Death's final album The Sound of Perseverance were originally intended to be Control Denied songs, but Schuldiner caved to studio pressure and used them for a final Death album instead. He intended to disband Death, at least temporarily, to focus on Control Denied, but his death ended that plan.

Not to be confused with Death, the '70s punk band, or Death.