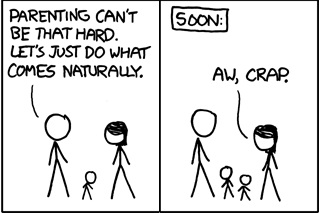 "The point is that just because something is natural doesn't mean it's safe. Lions are all-natural. So is hemlock. Next time you see 'all natural' on the label, keep in mind that what's really unnatural is living past 30."
— Cracked, "5 Natural Trends That Could Naturally Kill You"

The Appeal To Nature

called the Naturalistic Fallacy, involves assuming something is good or correct on the basis that it happens in nature, is bad because it does not, or that something is good because it "comes naturally" in some way. This is fallacious because it assumes the "natural" to be an ideal state without argument, effectively using it as a synonym for "desirable" or "normal." This is a form of equivocation fallacy, because "natural" can mean "consonant to a thing's nature, proper, fitting"; things that happen on their own do not have to fit that definition.

Bob: My father is terribly ill at the moment, but the doctors say this new treatment will save his life.
Alice: That treatment is unnatural. You need to accept that it's your father's time rather than trying to fight it.
Advertisement:

In most circumstances, Bob's father is obviously unlikely to consider himself better off dead than alive. This fallacy is sometimes combined with Retrospective Determinism, arguing that a given event was "just the way things are" and hence should not be regarded as negative. "It's nature's way."

may look like this fallacy, but isn't. The nature it appeals to is the essence of something, not the wild and woolly outdoors (though its critics argue that it can't help but devolve into this still, e.g. what if something's nature isn't good?).

Compare All-Natural Snake Oil, which is when advertising uses an Appeal to Nature.