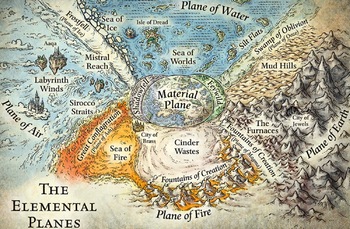 A setting that represents or is made of a concept/thing. It may be sentient, in which case it may also have an avatar running around. Often, they will be pocket or parallel dimensions separate from the physical world where mortals live, but they'll sometimes be discrete parts of the main setting. They are likely to come in sets, with multiple worlds for various elements or concepts. The four classical elements are the likeliest to get such planes, but this is by no means an exclusive rule.

Alternative Title(s): Plane Of Whatever