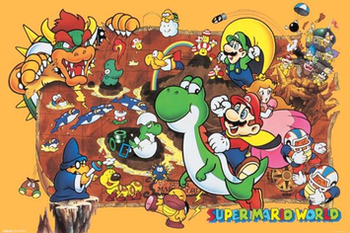 Super Mario World (subtitled Super Mario Bros. 4 on Japanese packaging) is a 1990 video game produced by Nintendo as a launch title for their 16-bit console, the SNES; it serves as the fifth console installment in the Super Mario Bros. series and sixth overall. It features their iconic mascot, Mario, taking a vacation alongside his brother Luigi and Princess Peach (then still known in the west as Princess Toadstool) to the faraway Dinosaur Land. There, as is prone to happen, the Princess is captured by Bowser and kept in his castle, this time located in the deep underground. Of course, Mario must journey through the entire continent to get to her, beating down Bowser's loyal children, the seven Koopalings, along the way. The video game was released on November 21, 1990 in Japan, but wasn't released in the United States until nine months later on August 13, 1991, concurrently with the delayed release of the SNES in that region. It is by far the best-selling game for the SNES, with over 20 million copies sold. However, the game was bundled with the console in many markets for a good part of its history, which skews sales figures - the "free" copies of Super Mario World players would get when they bought their SNES consoles still counted as units sold.note For those of you wondering, Sonic the Hedgehog sold 15 million units, though it too was bundled with the Sega Genesis for much of its lifespan. In North America and Europe it was later re-released in console bundles as in Super Mario Allstars + World with minor graphical changes.

This game is most notable for having introduced the world to Yoshi, Mario's now-famous dinosaur friend and his ability to eat the baddies. The game was followed-up in 1995 with Super Mario World 2: Yoshi's Island, a prequel starring Yoshi as the player character and featuring Mario and Luigi as infants; that game would mark the launch of the Yoshi's Island subseries. In terms of gameplay, Super Mario World also introduced enemies and features that are now mainstays, such as Wigglers, Monty Moles, Ghost Houses and levels with secret exits.

This game is also notable for being the first game (along with Pilotwings) directly crediting Shigeru Miyamoto as the creator of Super Mario Bros., rather than using a pseudonym as previous games did.note Albeit in Japan, his real name was revealed much earlier in 1986's The Great Mission to Save Princess Peach!.

A loose comic adaptation, titled Super Mario Adventures, was published by Nintendo Power in 1992, though the storyline is mostly original. The game was also adapted into a short-lived animated series.

The game was given an enhanced port to the Game Boy Advance as Super Mario World: Super Mario Advance 2, released in Japan on December 14, 2001 and the United States on February 11, 2002. While it removed the alternating multiplayer from the original, it instead offered the choice to play as Luigi during the campaign, who has his Super Mario Bros. 2-established abilities among other differences.

Please note that Super Mario 3D World is a separate game, not a re-release or a follow-up.