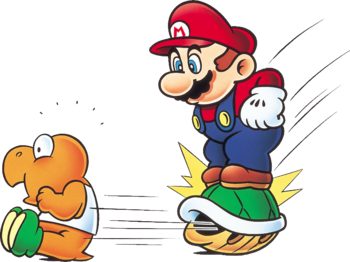 In Real Life, a turtle's shell is fused to its spine (It is, after all, a modified rib cage). Removing a shell in Real Life, if possible at all, will kill the turtle in seconds if the turtle is lucky. But in fiction, it is often treated as a removable article of clothing. Expect the turtle, when out of the shell, to be wearing little more than Goofy Print Underwear.

Alternately, the shell may be large enough to not only accommodate the resident turtle, but also allow somebody else to hide inside it at the same time. In some cases, the Removable Shell may also be portrayed as having a furnished apartment (and often Bigger on the Inside). Another variant will be for the turtle to withdraw all of its limbs (and its head) to make them pop out so that it does a 180 degree turn without moving from the spot. Slow animals with removed shells may become much faster.

A variant can apply to other shelled animals like snails, which also — with the exception of hermit crabs — are fused to their shells and cannot "take them off". In fact, the whole idea of "shells being removable" likely stemmed from empty shells found on beaches, which may lead to people believing that their "owners" left them behind. It's also often confused with "shell molting".

Contrast Eggshell Clothing (the shell that is supposed to come off does not).