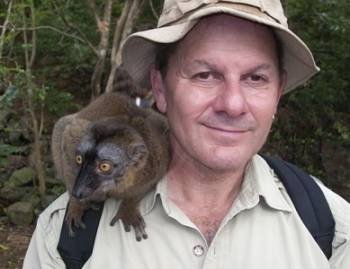 Alan Dean Foster (born November 18, 1946) is an American writer. He has written dozens of novels and short stories, most of them sci-fi, often with a decent helping of Space Opera. Also known for the novelization of Star Trek: The Animated Series episodes in Star Trek Logs 1 to 10 as well as a large number of feature films across multiple franchises (e.g. Alien, Star Trek, Star Wars). His aliens tend more towards Starfish Aliens than Human Aliens, and his settings tend to be beautiful, alien, and deadly. His work usually falls on the idealistic side of the Sliding Scale of Idealism vs. Cynicism and somewhere between soft and hard science fiction.

Among Star Wars fans, he's best known for writing the novelization of the original 1977 film, as well as the novel Splinter of the Mind's Eye—which was based on a proposal for a low-budget made-for-TV sequel to the original film, to be made in case it wasn't successful enough to get a theatrical sequel. As such, Splinter of the Mind's Eye has the distinction of being the first novel in the old Star Wars Expanded Universe (now Star Wars Legends). His novelization of the original Star Wars is also notable for significantly expanding the movie's plot, incorporating many unused ideas from George Lucas' own story notes (although many of those ideas were eventually contradicted by later films).

Some of his works

Works with their own trope pages include: