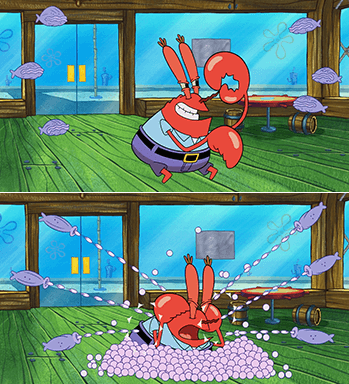 Aside from being edible, oysters are most well-known for the fact that they produce beautiful, valuable pearls. In fiction, however, their ability to do this is often exaggerated — for example, it usually takes much less time for a fictional oyster to create a pearl than it does in real life. And it's not just oysters that can do it — any bivalve can create pearls, though clams are most commonly used.

Although most fictional pearls are round and perfect naturally, the process of making them look like that in real life is far more complex. It's a delicate procedure that takes place at special "pearl farms".

Also, fiction tends to gloss over why bivalves have pearls. In real life, it happens when an irritant, like a small stone, gets into the oyster's body. The oyster covers the irritant with a special substance called nacre (a.k.a. "mother of pearl") to protect the oyster's body. The nacre eventually forms and hardens into a pearl. In pearl farms, workers perform surgery to plant particles in the oysters' bodies to get them to make pearls. But in fiction, bivalves just suddenly make pearls, often for seemingly no other reason than to display them, or for a character to take them. Fictional bivalves even seem to value such pearls, while a real oyster would likely prefer them removed as the irritants they began as.

Sub-Trope of Artistic License – Marine Biology. Tends to overlap with Clam Trap, if a bivalve chomps down on people who try to take its pearl, and Clamshells as Mouths if the bivalve's inside for storing its pearl is depicted as a mouth with a tongue. Expect bivalves in fiction to shoot their pearls as some sort of Abnormal Ammo.