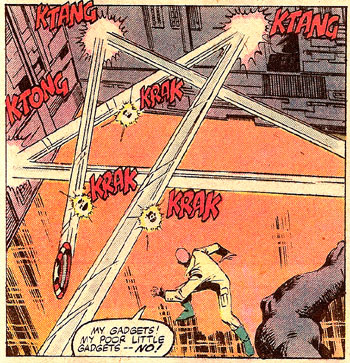 This pentagram brought to you by raw patriotism.
"Comic book boomerangs, rather than being just sticks with a vague tendency to curve around, are nearly supernatural items with an ability to return where they started no matter what happens. They can bounce off the interestingly ridged skulls of alien conquerors, latch onto weapons or jewelry, or run off to the bar for a quick Jack and Coke, and yet still return to the waiting hand of whatever costumed goon threw it."
— Lore Sjöberg, The Book of Ratings, "Green Arrow's Arrows"
Advertisement:

A real-life boomerang is a flat wooden tool carved in such a way as to get some rotor lift when thrown turning end-over-end. Thrown properly, the boomerang will curve back on its course and return to its point of origin. It was originally designed for hunting fowl. If it missed, the hunter wouldn't have to go looking for it; and if it hit, they'd simply retrieve it along with the kill. Some boomerangs allow for more complex trajectories, though these are more for sport than hunting.

In fiction, however, a boomerang is virtually a living creature possessed of the single goal of returning to the thrower's hand, come hell or high water. This results in boomerangs doing things that are flatly impossible, such as continuing to fly after striking one or multiple targets then returning to the user. It becomes humorous in video games, particularly older ones where boomerangs are crudely programmed to return to the player after being thrown. If you're still moving, it'll chase you all over the screen until you stop to catch it.

This trope covers all weapons that can perform this trick, not just boomerangs. Many of the examples below involve weapons that aren't even meant to be thrown, like shields or escrima sticks. Does it really have to be stated that the Rule of Cool is involved? See also Boomerang Comeback for when the boomerang initially seems to miss and then catches the target by surprise. Many of these weapons also are a Pinball Projectile where they adjust their course by bouncing off things rather than aerodynamic maneuvering. Compare Exactly What I Aimed At.