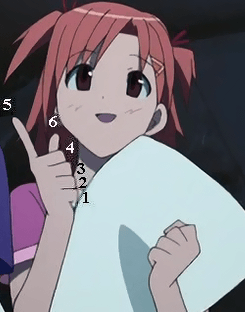 Makie's finger-counting skills go up to eleven as she magically grows an extra finger.
"I wish the art was good throughout the whole series, not just in the final episode."
"These days, anime has good art in the first and last episodes, never in the middle."
"That's not something you can just fix for DVD release."
— A bunch of ninjas being aware of their medium in the final episode of Ninja Nonsense
Advertisement:

in USD (as of 2020) depending on how popular and how long the show was going on.

When a production company decides that the important episodes (i.e. pilots, whams, and finales) of a show get priority, other episodes (like filler) will, to conserve production costs, be drawn with only the bare minimum of framework that they absolutely must have.

In American cartoons of the mid-'70s to early '90s, it was the norm to send animation overseas to studios in Japan, Korea, Taiwan, the Philippines, Australia and other countries to cut costs even further. The quality problems caused by budget constraints were thus exacerbated by language and cultural barriers. Japanese studios came to be seen by American studios as the "top of the line" of overseas studios because of their consistent aversion of this trope.note Even since the early '80s, Japan's been doing the exact same thing.

Long running shows suffering from budget issues or a troubled production schedule will start resorting to thinly-veiled camera tricks. The movement and even design of characters will start to slip, especially if the show is bothering to animate heavy action scenes. When they are animated, fight scenes will become Fight Unscenes.

The prevalence of computer-inked animation merely assures that colors stay consistent. Off model refers to the character model (on a model sheet), which is what the animators are supposed to base their drawings on. This is another important step in animation checking, which may be skimped on when time or money (or even both) are short.

Fans are typically not pleased, and it is very common for companies to announce they're fixing up things for the inevitable DVD release.

Some artists willingly invoke this trope and do not follow model sheets, such as John Kricfalusi's Ren and Stimpy. Following models too closely can lead to rigid and lifeless animation, whereas playing fast and loose with the designs can allow for more expressive and fluid animation. This does not mean that such creators "draw badly"; they still follow the basic rules of animation, and work to avoid outright errors. Similarly, animation principles such as smear frames and squash and stretch could be thought of as temporary and more subtle variations on that technique, where models are briefly disregarded in order to make a particular shot look more lively and less stiff — these moments often look perfectly on-model when played at normal speed, but look bizarre if the viewer pauses on one of the deliberately distorted frames.

See also Uncanny Valley, the result when it gets too far out of hand, and Special Effect Failure, which is a similar trope, but for live action and animation. Contrast Animation Bump, wherein the animation suddenly becomes much better than usual and Body Horror where an appearance similar to being off model is done intentionally and for horror. For animation studios who are notorious for this, see AKOM, Toei Animation, GONZO, Studio Shaft, Sunrise, Studio DEEN, Actas, Wang Film Productions, Diomedea, and Saerom. For a studio whose supporters and critics often argue about whether their animation is this, see Kennedy Cartoons.

Note: If a show has constant instances of Off Model, then list notable examples of it. In addition, try to avoid typing Zero Context Examples.

Anime fans from Japan have their own phrase for this trope, 作画崩壊 (sakuga hōkai), literally "drawing collapse". On the internet, it is also known as QUALITY.note Always spelled in ALLCAPS.

Below are examples in text form. For visual examples, you can visit this LURKMORE article

, or this Know Your Meme page