Depending on the Artist 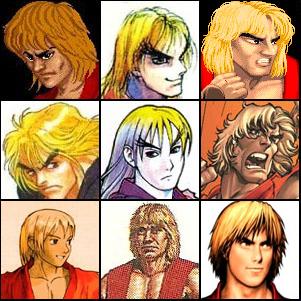 As is obvious, different artists interpret the character differently. Some artists see Marisa as having small breasts, and others see her with even smaller breasts.
— UsuallyDead

Every artist has their own take on the characters they draw. Sometimes that take is jarringly different from previous depictions.

That's when this trope comes in: it's what happens when an incoming artist willfully changes a character's basic appearance, giving the character a significantly different height or build, less (or more) prominent deformities, a different apparent age, a radical, unmotivated costume or hairstyle change, or even a Race Lift without in-story justification.

This is common in comics, where it often involves incidental parts of a character's outfit being either exaggerated or downplayed. For example, this is how the Superman symbol evolved to the familiar diamond-shape from the more triangular one of his first appearance.

Note that this trope is only about deliberate, unexplained changes; it does not apply to changes caused by story events, nor to very slight variations caused by differences in art style (such as between multiple storyboarders). (The acid test might be this: If the character were a real person of whom many color photographs existed, would all the drawn portrayals still make sense?)

Many cases of Progressively Prettier and more than a few aversions/examples of the Most Common Superpower depend on the artist.