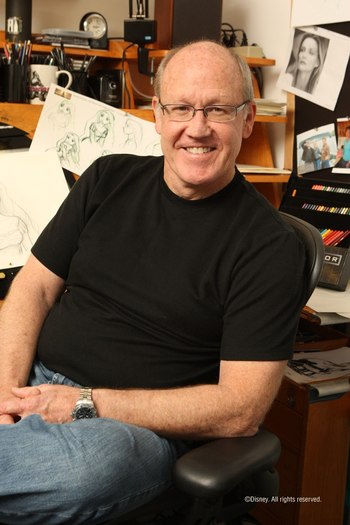 "I never drew for the sake of drawing. I drew to make the paper go away."
Advertisement:

Glen Keane (born April 13, 1954) is one of the most famous modern animators and arguably the most respected living artist in hand-drawn animation.

The son of The Family Circus creator Bil Keane (who actually used him as the model for Billy in the strip), Glen applied to the Illustration school at the California Institute of the Arts, but in a lucky twist of fate, his application was accidentally sent to the Film Graphics school, where he was mentored under UPA veteran Jules Engel.

Keane graduated from CalArts in 1974 and became an animator at Walt Disney Productions. The studio's animated feature The Rescuers would be his first assignment, working on the characters of Bernard and Penny alongside famed veteran Ollie Johnston. Afterward, he animated Elliot for the otherwise live-action film Pete's Dragon (1977) (under the supervision of Don Bluth) before being promoted to supervising animator on The Fox and the Hound, where he animated Tod's climactic showdown with a ferocious bear.

Throughout his career, Keane designed and animated many of the leading characters for Disney's films during the studio's "Renaissance" era, from slender, athletic and charming characters like Ariel, Pocahontas, Tarzan, and Aladdin to unkempt, bulky brutes like the Beast, Ratigan, and John Silver. Afterward, he was to be a director of the studio's CGI feature film Tangled, but due to "non-life threatening health issues", he stepped down and became an executive producer.

On March 23, 2012, Keane resigned from Walt Disney Animation Studios after 38 years of service. He has since started his own animation studio, Glen Keane Productions, to pursue more personal projects, and joined Motorola's "Advanced Technology and Projects Group" to create interactive hand-drawn animation. In 2014, Keane premiered a new short film Duet at that year's Google I/O conference as the latest in the company's "Spotlight Stories" of interactive shorts made exclusively for mobile devices.

In 2018, Keane directed an animated rendition of Kobe Bryant's poem Dear Basketball, which earned both many awards, including the Academy Award for Best Animated Short Film.

In 2020, he directed the animated feature, Over the Moon.

Apropos of nothing, but he's also insanely good at doing impressions of his mentors, Disney's Nine Old Men.