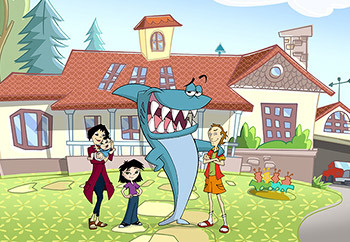 "When do we eat?"
Kenny the Shark (2003-2005) is an American animated television series produced by NBC's Discovery Kids, which ran for two seasons with a total of 26 episodes.
Advertisement:

The series is set in California and centers around a little girl named Katarina "Kat" Cassidy (voiced by Kelli Rabke) and her pet tiger shark, the titular Kenny (voiced by Jim Conroy). As explained in the theme song, Kenny was a shark that decided to move up on land after becoming tired of the ocean, while Kat was a girl looking for a special pet that she could love for her own. When they met, it was love at first sight.

Notable about the premise of the show is that Kenny, although a shark, is capable of walking and breathing on dry land, among other obvious feats that no shark in real life is capable of doing—other aquatic life is shown being able to do this as well. Nobody in the show questions this. Kat is also able to speak shark, making her the only one who understands just how intelligent Kenny actually is.

Before the series proper aired, Kenny featured in a series of animated shorts in the 1990s that were all from his point of view.