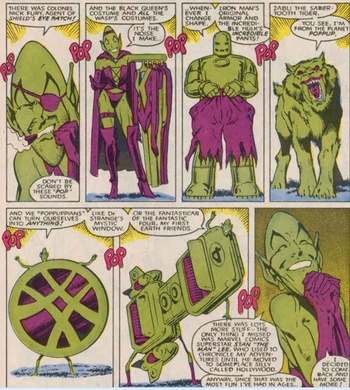 In most depictions of Voluntary Shapeshifting, the power is usually left idle until needed while the character goes about their daily lives in a single Shapeshifter Default Form; at the very least, they only make use of this power to take a single form per occasion. However, some shapeshifters have this power in use all the time, shifting wildly from form to form over the course of a scene, perhaps due to Power Incontinence or simply due to personal taste.

In the case of individuals who constantly shapeshift by choice, characters with this brand of shapeshifting tend to have few (if any) drawbacks to using their powers, and may possess bizarre personalities to match their constantly-changing bodies — from the harmlessly eccentric to the unabashedly mischievous. Some may even possess utterly alien viewpoints as a result of their powers, and rarely ever return to their true form — if they even have one.

If their shapeshifting is involuntary, however, they may not have a choice. In more fortunate cases, something may trigger their shapeshifting, such as people's perception of them. In the absolute worst-case scenario, their bodies may simply shift wildly without any obvious cause/trigger, and this can be played either for drama or laughs.

Whatever the case, the shapeshifter is either unable or unwilling to retain a single form for very long — unless absolutely necessary.

The shapeshifting sorcerer Ekh appears before a luckless fisherman, constantly transforming as he does so.

The shapeshifting sorcerer Ekh appears before a luckless fisherman, constantly transforming as he does so.