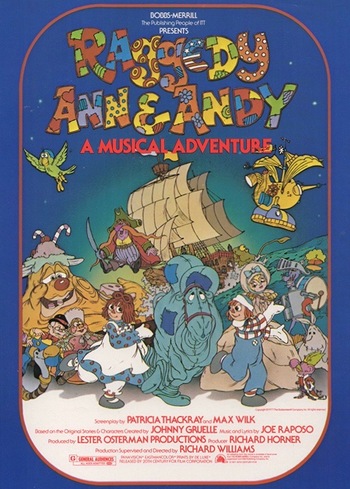 The Greedy on the far left? He's not as stable and cute as the poster makes him out to be.
"This is really weird."
— Raggedy Andy (summing up the movie in general)
Advertisement:

Raggedy Ann & Andy: A Musical Adventure is a 1977 animated film (with a few live-action segments) directed by Richard Williams, based on the doll characters created by Johnny Gruelle, and best known for being really freaking weird.

The plot is based on the book Raggedy Ann and Andy and the Camel with the Wrinkled Knees, by Johnny and Marcella Gruelle. Raggedy Ann and her brother, Andy, are dolls who live together in little Marcella's room with other friendly toys. The day of her birthday, Marcella gets a Jumeau doll, Babette, who is quite vain. A pirate captain in a snowglobe is immediately stunned by her and decides to elope with her to make her his bride. Ann and Andy decide to go rescue her, and on their journey, they meet a depressed blue camel doll (The Camel With The Wrinkled Knees), a lake of sentient taffy that keeps eating itself (The Greedy), an insane knight who plays practical jokes (Sir Leonard Loony), and a diminutive king who inflates when he laughs (King Koo Koo) until a final confrontation on the pirate's ship.

Raggedy Ann is voiced by Didi Conn, known for later playing Frenchie in the Grease films, and Denise on Benson, and Stacy Jones on Shining Time Station. Joe Raposo (Sesame Street) wrote the songs (one of which would also end up on Shining Time Station). It was Eric Goldberg's first professional animation gig, and Dan Haskett's first work on a feature.

Followed by the TV holiday specials Raggedy Ann and Andy in The Great Santa Claus Caper & Raggedy Ann and Andy in The Pumpkin Who Couldn't Smile in 1978 & 1979, both directed by another legendary animation director, Chuck Jones. Compare to Toy Story, which was released 18 years later and follows many of the same story beats (toys coming to life when humans not looking; new toy coming in and having to be recovered on their owner's birthday; toy that is sad about being left away from its owner).

A book about the making of the film, The Animated Raggedy Ann & Andy by John Canemaker, can be read here as well.

You can read the the WordPress review of it here.