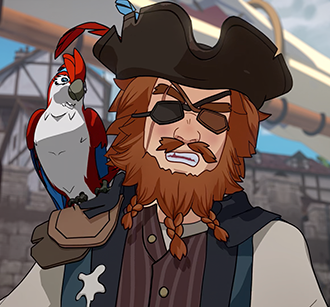 They'll make you squawwwwwk the plank!
"He's a mute, sir. Poor devil had his tongue cut out, so he trained the parrot to talk for him...no one's yet figured how."
— Joshamee Gibbs, Pirates of the Caribbean: The Curse of the Black Pearl.
Advertisement:

Diabolical Masterminds have the Right-Hand Cat. Pirate Captains have the Pirate Parrot. Expect these colorful feathered companions to be chatty and demand crackers. Pirate Parrots usually ride on the shoulder of their pirate owner.

The parrot may or may not:

In Real Life, it is not known if many pirates actually kept parrots for pets. Parrots are high-maintenance animals that serve no benefit on a ship (unlike, for example, cats, which keep the vermin population down). However, there are records of the occasional (non-pirate) Caribbean sailor keeping parrots and even monkeys as pets, so it's not too unlikely. The whole concept of a pirate and his parrot companion likely started with Treasure Island. And parrots in Real Life do naturally prefer to stand on a person's shoulder. It's also worth noting that at a certain point of time pet parrots commanded huge prices in Europe, so it is not inconceivable for a sailor wanting to settle down to trade in several parrots as a retirement benefit of sorts (parrots do tend to have large lifespans, sometimes surpassing even humans), probably leaving one to himself — which is probably where it all started.

Expect some amount of Misplaced Wildlife. Cockatoos, for example, come from Australia and Indonesia, and would be far less likely on the shouldernote You may now think about the digestive tract of the parrot... of a Caribbean pirate than a macaw or amazon parrot of Central and South America. Then again, most animated parrots are some strange conglomeration of psittacine characteristics rather than realistic: macaw-shaped and colored, Amazon-sized, with a cockatoo crest. In a Space Pirate setting, expect the "parrot" to be an alien or a robot. For Sky Pirates, it could be either a normal parrot or a steampunk-styled Clockwork Creature.

Related tropes include Dressed to Plunder, Parrot Pet Position, and Feather Boa Constrictor. In a setting with anthropomorphic animals, the pirates can be anthropomorphic parrots themselves, though wouldn't count as a Semiaquatic Species Sailor. See All Witches Have Cats for another animal in a similar position to another popular figure in fictional stories.