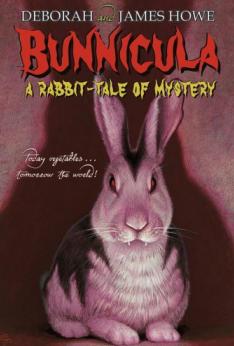 Bunnicula is the name of a series of children's books written by Deborah and James Howe about a "vampire bunny" who is adopted by the Monroe family, who give him the name "Bunnicula" when they find him on a seat in the theater while going to see the movie Dracula. The story centers on the family's pets, Harold, an old, good-natured mongrel, who is the narrator of the story, Chester the cat, who has a vivid imagination and suspects Bunnicula of being a vampire, and the eponymous bunny, who never displays any overt vampiric traits despite constant accusations by Chester.

The series is something of an Affectionate Parody of the horror genre, with equal parts mystery and comedy as well. The first book, simply titled Bunnicula, was written together with Howe's late wife Deborah.

In 1982, the first novel was adapted into a half-hour animated adaptation for the ABC Weekend Special by Ruby-Spears. However, the special had many differences from the novels.

In 2016, Warner Bros. Animation, the current owners of most of the Ruby-Spears catalog, produced a Bunnicula animated series, adapted fairly loosely from the original novels, which premiered on Cartoon Network's Saturday morning block.

There is also the spin-off series Tales From The House of Bunnicula:

There is also a series of Bunnicula books for very young readers:

As well as several non-fiction books:

The Tales From The House of Bunnicula series provides examples of: