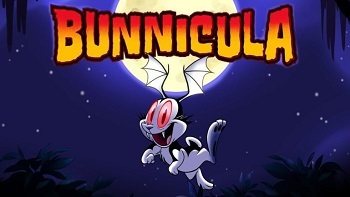 Bunnicula is an American animated television series from Warner Bros. Animation developed by Jessica Borutski, produced by Borutski herself and Maxwell Atoms, and distributed by Warner Bros. Television.
Advertisement:

Loosely based on the children's book series by James Howe and the late Deborah Howe with some influences from the previous Ruby-Spears special (itself now owned by WB), the show is a dark comedy about a vampire rabbit who likes carrot juice instead of blood, a Siamese cat who tries to rationalize everything, and a dog who just goes with the flow.

The show can be found streaming in its entirety on Boomerang.

Why you shouldn't let a vampiric rabbit eat beans.

Why you shouldn't let a vampiric rabbit eat beans.