Western Animation / The Boss Baby: Back in Business 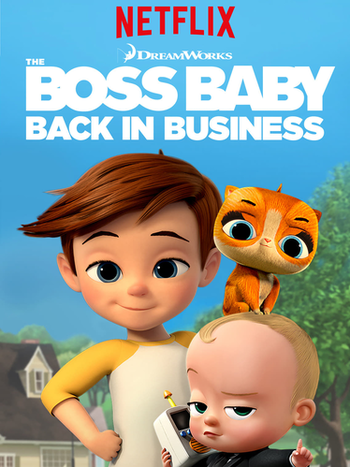 The Boss Baby: Back in Business is a Netflix television series based on DreamWorks Animation's The Boss Baby. The show takes place after said film and follows Boss Baby and his brother Tim as they take on some of the other groups that Baby Corp has deemed threats to "Baby Love". Season 1 deals with Bootsy Calico, a man who was raised by kittens and who is now out to ruin Baby Corp and take away Baby Love. Season 2 follows up with the Consortium of Ancients, old people who are after the same desires as babies.

The show was streamed to Netflix on April 6, 2018. A trailer

was released. It has ended at 4 seasons. A Sequel Series based on the events of The Boss Baby: Family Business, entitled The Boss Baby: Back in the Crib, released on May 19, 2022.