Western Animation / Bunsen is a Beast 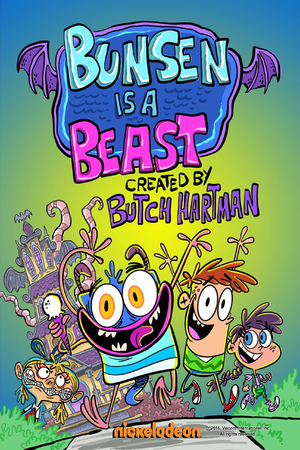 Bunsen Is a Beast!note Clockwise from left to right: Amanda Killman, Bunsen, Mikey Munroe, and Darcy. Not pictured: Beverly and Sophie Sanders.
"Not a bear and not a yeti
Many hands to eat spaghetti
Hole in head that shoots confetti
Bunsen Is a Beast!"
Advertisement:

Bunsen Is a Beast is the fourth Nicktoon to be created by Butch Hartman, after The Fairly OddParents, Danny Phantom, and T.U.F.F. Puppy. The series was previewed on Nickelodeon on January 16, 2017, followed by its official premiere on February 21, 2017.

Bunsen Is a Beast centers around a beast named Bunsen, who is the first beast in Muckledunk Middle School, and Mikey Munroe, his human friend. However, a girl named Amanda Killman wants Bunsen gone so that his kind will not increase on earth. Together, the duo try to navigate through school life.

The show ended roughly one year later on February 10, 2018, after only one season due to Butch Hartman's retirement from Nickelodeon.

Tropes pertaining to the series:

Bunsen Is a Beast!