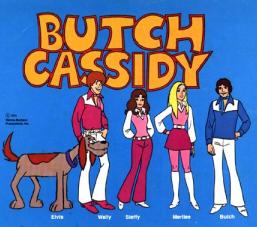 "Travelin' around all over the world,
solvin' every mystery/
Puttin' it together with the Sundance Kids,
You're somethin' else, Butch Cassidy..."

Butch Cassidy and the Sundance Kids is a Saturday morning cartoon produced by Hanna-Barbera Productions in 1973 for NBC. The show features several Follow the Leader elements that are often bungled online. The Five-Man Band is designed to fit similar roles to Scooby-Doo, Where Are You!. However, the way band travels around the world foiling schemes and the nature of the people they apprehend makes the actual show more like a cross between Josie and the Pussycats and Jonny Quest. The show itself depicted the adventures of a teenybopper rock group - led by heartthrob Cassidy, who - while eluding fans - worked undercover with his bandmates as a team of teenage secret agents (Butch, Merilee, Steffy, Wally, and Wally's dog Elvis), solving mysteries and apprehending criminals.

The teen musical sleuths were advised by a supercomputer named Mr. Socrates, who, strangely enough, was highly allergic to fleabag Elvis. So when the group visited Mr. Socrates for their latest assignment, Elvis was always made to stay outside the lair. But in each episode, either Elvis would find his own way in, or Wally - forgetting Mr. Socrates' allergy - would for one reason or another bring Elvis into the lair. Either way, Elvis' presence would cause the supercomputer to violently sneeze, blowing the group out of the lair and off to their assignment (in one episode the mere mention of Elvis' name aggravated Mr. Socrates' allergy!).

Cassidy (designated as "Sundance 1") wore a special ring with a hidden communicator to keep in contact with Mr. Socrates from afar. When they performed their music, Butch sang and played lead guitar, Merilee played tambourine, Steffy was on bass guitar and Wally was the drummer.

The series title is a word-play on the title of the unrelated 1969 film Butch Cassidy and the Sundance Kid.

Micky Dolenz, formerly the drummer and most commonly used singer of The Monkees, provided the voice of Wally, drummer for The Sundance Kids.

"I pick that ax, and then I get a call,
Some bad guy is gonna take a fall/
One by one we're gonna meet them all,
and solve that mystery...
Come along with me, Butch Cassidy...!"