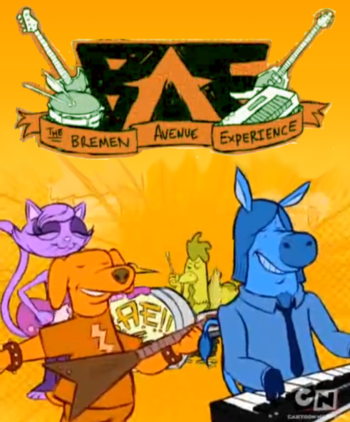 The Bremen Avenue Experience is an Animated Show whose five episodes were made by writer Steve Patrick and director Adam Fuchs in 2008 for Cartoon Network's "Wedgies" program. It's a modern adaptation of "The Bremen Town Musicians", a Fairy Tale from Germany popularized by The Brothers Grimm.

The titular characters are four Funny Animals who have formed a Garage Band. The series revolves around the group's rehearsals, where they deal with each other's quirky personalities while trying to make music together (and sometimes succeeding). The band members are Barrett the donkey, the keyboardist who's (more or less) in charge; Simon the dog, the enthusiastic guitarist; Jessica, the feline bassist who's a little more sensible than the others; and Tanner the rooster, the lovably eccentric drummer.

All five episodes can be watched on the Cartoon Network website.