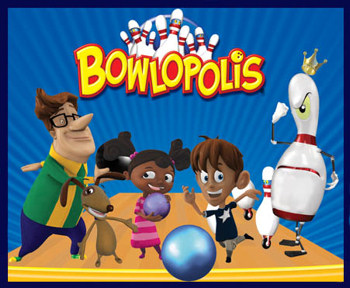 Bowlopolis (2008-2011) is an All-CGI Cartoon released by the Bowling Proprietors' Association of America and the United States Bowling Congress, about a boy who must play a giant talking pin at bowling to win back his kidnapped father, save the world, and win a sizable trophy. The series is aimed at kids, and features safety instructions and helpful tips for beginning bowlers.

The series begins with Layne Kegler playing his favorite video game, Mutant Android Pastry Chefs, when he gets a call from his dad saying that he is being kept in the basement of the titular Bowlopolis by the intergalactic villain Kingpin. He shows up at Bowlopolis and is challenged to a bowling game by Kingpin, for control of Mr. Kegler, the world, and that very sizable trophy. The only problem is, Layne has never bowled a lane in his life. He'll have to learn pretty quick if he ever wants to see his dad (or the sizable trophy) ever again!

Other characters include Reset, a dog that only Layne knows can talk (but is really bad at keeping it a secret.) Reset does most of the education on the show, but sometimes delegates it to the stick figure, Sticky. Another charcter, Carrie, is a hyperactive 10-year-old Motor Mouth whose birthday Layne forgot. Layne insists She Is Not My Girlfriend.

The episodes are hard to find online, but your local bowling alley is likely giving out the DVDs for free so no sweat.