The One Who Wears Shoes 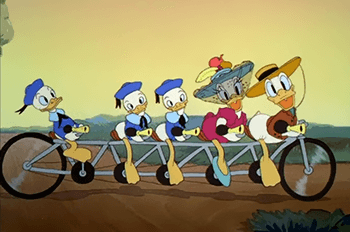 Funny Animal characters tend not to wear shoes. This is arguably even more common than their tendency not to wear pants.

The curious thing, though, is that in any setting where fully dressed, but barefoot or half-dressed cartoon animals are the norm, there will usually be one character who subverts this by wearing shoes, socks, or booties of some kind. Often this is a sign of the character's "otherness" among the cast, or employed to emphasize a character's femininity. (Or both.)

Being the shoe-wearer may signify them as the level-headed one... or the wonky one.

Sometimes, this is inverted by having footwear-wearing be the status quo and being barefoot be an exception.

Fully Dressed Cartoon Animal is a related trope. Subtrope of Appropriate Animal Attire. Does Not Like Shoes is the inversion that specifically deals with a cast that wear footwear by default, mostly humans.

Note that nearly all examples are of animation, and are organized according to Film or TV, not under Western Animation.