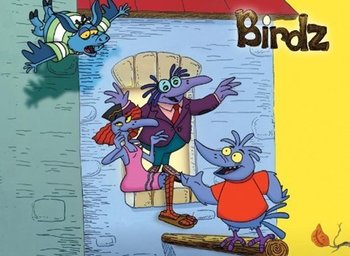 Birdz is a short-lived Canadian cartoon from Nelvana that was made by Canadian animator Larry Jacobs in association with American network CBS and Scottish network STV. It made its debut on the former channel in 1998, as one of the network's last Saturday Morning Cartoons. Running for only a single season of 13 episodes, the show later came to STV in 2001, and also aired in its home country of Canada on CTV and Teletoon.

The show follows the life of Eddie Storkowitz, a 13-year-old blue-feathered bird boy with a big imagination and dreams of becoming a famous moviemaker someday. His mother, Betty, is a professional artist; his father, Morty, is a psychiatrist; and he also has two sisters, his hippie older sister Steffy, and his baby sister Abby. Eddie also attends school, where he crushes on his teacher, Miss Finch, and hangs out with his classmates Sleepy Bat, Gregory Woodpecker, Tommy Turkey, Spring Robin, and Olivia Owl. Other characters include Eddie's principal, Mr. Pip; Morty's regular patient and Storkowitz family friend, Mr. Nuthatch; and the resident cop, Officer Pigeon. All in all, Eddie's world is one where birds live and act a lot like people do, even though they all still fly to get around, live in trees, eat bugs, and migrate south for the winter.

Every episode is up on Nelvana's Retro Rerun channel